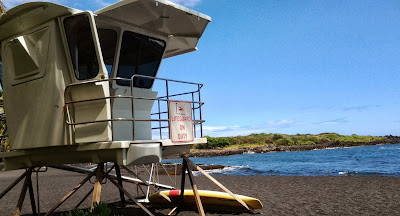 What was your inspiration to become a Lifeguard for Hawaii County?

That would be in 1995, when I was living in Lapahoehoe and I was blessed to have an old Hawaiian man as a neighbor.  He had asked to kokua (help) paint the swimming pool roof. (Laughing) Being from the mainland I didn’t know what that (kokua) meant.  The Lifeguard at the time Ms. Bowman was holding a CPR and lifeguarding class and invited me to take the course.  I didn’t want to at the time, but I showed up that night.  Later I took the test and got a phone call saying you’re hired for the summer of ’96.  And I’ve been a Lifeguard since.

Roughly how many rescues have you done?    END_OF_DOCUMENT_TOKEN_TO_BE_REPLACED

Because I’m such a lightweight, I would be passed out behind the bar from my own products.  My tip jar would be empty, the bar would be raided and there would be a half naked bartend laying on the floor.  Thankfully I write and not bartend.  Honolulu bartender Aria Kamahoahoa, who excels at both, shares her stories in a laughrageous Q&A that exposes the pitfalls and triumphs of serving the thirsty in Paradise.

How did you go from bar patron to bartender?
Long story short, when my ex and I split up, I worked a second job to survive, but I was spending more money in a bar than I needed to. Coincidently my girlfriend told me a bar was looking for a server and suggested I apply there. Her words were “you’re always in a bar, why don’t you work in one?” I was apprehensive at first but when the owner told me in the interview about nikohana(high commission), I was all about it. Drink and get paid to do it?! Fuuuck. Sold! Sign me the fuck up.

Bartenders are known for lending an ear.  What stories stand out among the rest?
Geez. Really?  I’ve heard it ALL.  Stands out…This guy who comes in once in a while with a different chick almost every time told me once that he has a goal of fucking 100 chicks before he reaches the age where he has to use Viagra.  He told me he had fat pussy, old wrinkled pussy, married pussy, fresh 18 year old pink, threesomes, orgies, all kine. Braddah(dude) was proud of it. AND he had the nerve to hit on ME even AFTER I told him he was disgusting! I mean, braddah was good looking, I give him that but fuck! So when he’d come in by himself he would tell me how the last chick he brought in was. I gotta say, it’s pretty entertaining to hear his stories tho. It’s like he’s warming up my engine before I go meet the boo to let him drive me. Hard.