I met up with a couple of friends for Fourth of July.  We were knocking back drinks at a local bar and catching up on each others lives.  The food was great and the service was awesome.  The sky was pale orange with a hint of lavender clouds that signaled dusks arrival.  A great end of another Hawaiian day.  Enter SMS.

With the growing anticipation of the upcoming firework show we hurriedly moved from one conversation to the next.  Tried to at least.  One of my friends, lets call her TW.  TW for text whore.  TW made it extremely difficult for the party to get through conversations.  At times, her phone became more important than spoken discussion.  TW claimed that she was multitasking, responding to messages and partaking in the trios confab.

FYI, unless you’re juggling five rabid squirrels and whistling the Juicy Fruit jingle while riding a rusty unicycle, you’re not multitasking.   You’re just switching from one task to another.  Which is what I informed TW.  TW snapped back profanities and evil looks.  Something common in my daily routine.  Life is difficult when you’re right.

Definition of Irony:  The tool created to bring us closer has become the device that brings us closer to detachment.

Over a month ago, I had lost a tooth.  I didn’t misplace it or do shady transactions with a meth addict.  It was thanks to a busted filling and an infection, resulting in my tooths removal from his gummy home.  Goodbye molar.  You will be surely missed.

I never understood why we only have two sets of teeth.  In a biological sense I do.  But a serious toothache can lead to a slew of health risks, possibly death.

So why do sharks have an endless surplus of teeth?  Besides using driftwood as toothpicks, all they do is eat and grow teeth.  Mako and I found a humpback carcass near the sandbar, wanna come?  Nah, just gonna swim around and grow teeth.  Sharks are show-offs. END_OF_DOCUMENT_TOKEN_TO_BE_REPLACED

I’ve decide to take on the Fit To Write, Weekly Writing Challenge.  Why?  Because my story will beat up your story.  Shall we?

The story takes place in 2007, when MySpace was hanging on to its last member and most of the world still had jobs.  My girlfriend at the time, attended a Yoga class at the Y which allowed her to bring one guest.  The cheerful invites to accompany her weekly routine was met with my common utters of “Next time babe” or “Do I have to?”  With each animated request, I could always see the growing pleeeease emanating from behind her sparkling eyes.  I am a sucker.    END_OF_DOCUMENT_TOKEN_TO_BE_REPLACED

I’ve been downloading mashups from Soundcloud for years now. Covering the majority of genres of popular music and songs, it is unequivocally my favorite form of discovering new tunes. Consider the arresting vocals of John Lennon layered with the rugged riffs from Rage Against The Machine. Or Reggae inspired covers of Tupac with Disco paced bass lines. With an extensive amount of professional and amateur Djs, they’ve offered me the ability to fall in love with the songs I’ve always admired all over again.

Beyond the surface of the audible intent, the creativity and expression of it’s proclaimed mixers is to be marveled. When the earbuds are plugged in and the Playlist set to SoundCloud, a one block walk for groceries END_OF_DOCUMENT_TOKEN_TO_BE_REPLACED

An audible disarray of hundreds of pairs of slippers, sneakers, and heels shuffle while mobile devices utter their faint and recognizable chimes.  The hot Hawaiian breeze is infused with senseless chatter.  The people, many.  The line, long.  And the solar beast in the sky is having a bake fest.  Note to self, bring a fucking umbrella.  Because it’s not raining.    END_OF_DOCUMENT_TOKEN_TO_BE_REPLACED 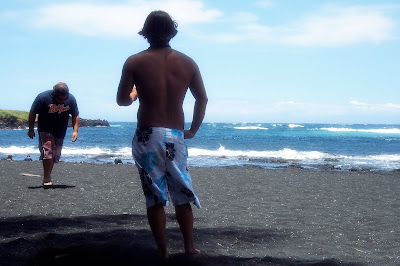 Amongst peaceful scenic views, there is disharmony in my ears. And it’s very loud. I battle this boom of dramatic whining, with my imaginary mp3 player. I fucking forgot to pack my Zune, so I have to pretend jam to Aerosmith with my air guitar. And with no earbuds to plug my human sonar, I am tossed in the mecca of dramaville, without a life vest.

“Issues” are wherever you take them. People that jump ship and ditch locations in hopes of a better situation, have yet to understand that. But for some reason, Big Island inhabitants believe it’s cooler if you have more. And it’s way cool to share issues to anyone and everyone, AND their pet goat. It’s like they hoard an inventory of “one up” stories of struggles, ready at their disposal. Because if you’re miserable, then it’s cool. No, choice.    END_OF_DOCUMENT_TOKEN_TO_BE_REPLACED